For over 100 years Queens  has been at the heart of community life in Broadstairs, meeting right in the centre of Broadstairs.  The church has a long and established tradition of providing both spiritual and social support which we believe has been valued by our community.  Beginning in a small meeting room in 1899 the work soon developed and expanded and led to the building of additional facilities in 1907. This building became home for an ever increasing number of worshippers and a variety of activities. 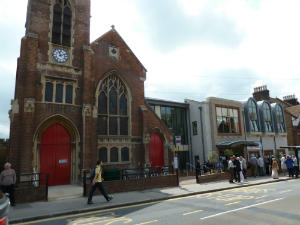 The work of serving the local community as a thriving fellowship with a social concern continued throughout the last century.  In the 1960's it was recognised that additional premises were needed to meet the expanding work within the local community. A neighbouring house was purchased and eventually demolished to make way for the erection of the existing church halls.  These contain two large halls, a well-equipped kitchen, toilet facilities, together with a smaller room and four offices.

Queen’s continued its link with the local community and in the late 1990's developed a vision for a community project based in the existing facilities. Since that time we have tried to meet some of the needs of a wide range of groups in the town through the GAP Community Project, (which was established to spearhead the work in the community). Through GAP we provide a wide range of activities for people of all ages and each week over 1000 people access our facilities.

Following the departure of the Revd. Michael Jones after 21 years at QRBC, Stephen brought a new vision to the church of the way that team ministry could develop in the future. This involved bringing together a team of specialists (youth worker; team minister; pastoral worker) to supplement and expand the existing work of the church. Samuel Hearle joined the team in 2004, first as youth worker and then as Youth Minister and Rhodri Walters began here in August 2006 as Team Minister.

In recent years the church began to recognise that its existing facilities were becoming unsuitable for the vision that the church has. We therefore decided to take a radical look at our premises and resources and to seek a way forward which has provided us with a new building which will meet our needs both as a worshipping Christian community and as a community of Christian faith wanting to make an impact both locally and globally.